Odion Ighalo has chosen his maiden start and goal for Manchester United against Club Brugge as one game he will always cherish in his life.

The 30-year-old made his way into the starting XI in a Europa League match against the Belgian side at Old Trafford after playing as a second-half substitute in his first two outings for Ole Gunnar Solskjaer’s team.

Ighalo marked his first start by breaking his duck in the 34th minute, thanks to Juan Mata’s assist which doubled United’s lead in the encounter.

The ex-Nigeria international contributed four goals with an assist before the suspension of football, and he recalled the experience.

“It’s a great memory and it was a dream come true. Starting your first game and scoring your first goal at the same time, it’s something you’ll always cherish in your life,” Ighalo told the club website.

“In the years to come, I’ll look back at my first start for the team and my first goal.

“The atmosphere in the stadium was mad, the fans were singing and supporting the team. They were supporting me and singing my name and that gave me more courage and more spirit to fight, to score even more. I’m very happy about that. It’s going to be in my head forever.”

After settling for a 1-1 draw in the first leg, Manchester United progressed to the next round with a comfortable 5-0 victory at home.

“Coming home to Old Trafford, we knew we needed to win that game for us to go into the next round. We started so well, we were pressing up high and tried to attack from start to finish. It was a great display from the team – 5-0 in the Europa League is not easy.”

They thrashed Austrian club LASK 5-0 in the first leg of their Round of 16 fixture with Ighalo scoring a goal and creating another behind closed doors on March 12. 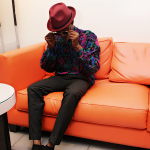 Video Of The Month

Song Of The Month

You may have missed